One of the world’s oldest buildings and possibly the oldest astronomical observatory still standing. In Ireland, it’s the site of a whole run of myths and legends that every child learns in primary school. Yet if you’re not Irish, you’ve probably never heard of it….

Newgrange is a 5,000-year-old earthen monument that works as an astronomical clock: on the shortest days of the year, light from the rising sun shines straight down the passageway and illuminates the inner chamber. It is older than Stonehenge and the Pyramids of Giza.

Rare, for such a World Heritage Site, you can actually go inside it. Every tourist gets shown a simulation of the way the light shines into the mound. If you’re very lucky (there is literally a lottery), you can be one of the few privileged enough to experience the real deal: the sunlight of the winter solstice beaming in. Speaking from my own experience, it’ll be one of the highlights of your life!
What makes this place even more special, is that it’s not alone. It’s one of three massive such passage-tombs and thirty-seven other barrows all within the same area. This is the Bend of the Boyne and it’s rich with myth and magic and wildly improbably tales that happen to be true.

This site uses Akismet to reduce spam. Learn how your comment data is processed.

We're not around right now. But you can send us an email and we'll get back to you, asap. 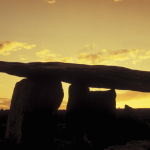 You’re history!Current Projects, Influences, Myths, Writing
We use cookies to ensure that we give you the best experience on our website. If you continue to use this site we will assume that you are happy with it.OkPrivacy policy