I was unprepared. It was at a shopping centre checkout where the worst that can assail you is celebrity gossip and unwanted chocolate bars. Then a badly printed poster caught my eye. Surely not? I must be seeing things…

I looked closer. No, it really wasn’t as bad as I’d thought.

The local fund-raising event this coming weekend is to involve a legion of Stormtroopers and a gaggle of Disney Princesses. That’s an odd combination at the best of times, but what shell-shocked me was the sight of Princess Leia in the swishy-dress line up. Leia, Disney-fied.

Now I already knew George had sold the franchise but I hadn’t followed that aspect to its logical conclusion: meeting’n’greeting Leia at Disneyworld. I’d been too caught up in the sheer brass-neckery of his multi-billion deal neatly followed by marrying the new Disney company president. That’s having your cake, eating it, and sharing it with the family! All respect to George: he is my hero for how to make a modern myth and that’s not including the actual Star Wars stories. But more on that another time…

Meanwhile, here is the best image I’ve seen of my kick-arse heroine gone all girly.

This site uses Akismet to reduce spam. Learn how your comment data is processed.

We're not around right now. But you can send us an email and we'll get back to you, asap. 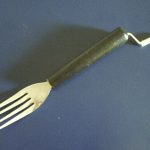 Did you kill the President of Paraguay with a fork?Influences, Writing
We use cookies to ensure that we give you the best experience on our website. If you continue to use this site we will assume that you are happy with it.OkPrivacy policy